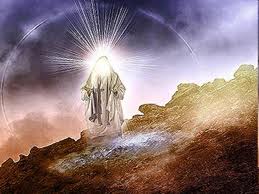 When Moses came down from the mountain of Sinai – as he came down from the mountain, Moses had the two tablets of the Testimony in his hands – he did not know that the skin on his face was radiant after speaking with the Lord. And when Aaron and all the sons of Israel saw Moses, the skin on his face shone so much that they would not venture near him. But Moses called to them, and Aaron with all the leaders of the community came back to him; and he spoke to them. Then all the sons of Israel came closer, and he passed on to them all the orders that the Lord had given him on the mountain of Sinai. And when Moses had finished speaking to them, he put a veil over his face. Whenever he went into the Lord’s presence to speak with him, Moses would remove the veil until he came out again. And when he came out, he would tell the sons of Israel what he had been ordered to pass on to them, and the sons of Israel would see the face of Moses radiant. Then Moses would put the veil back over his face until he returned to speak with the Lord.

The Word of the Lord.
Thanks be to God.

2. Among his priests were Aaron and Moses,
among those who invoked his name were Samuel.
They invoked the Lord and he answered.  Response

GOSPEL
A reading from the Gospel according to Matthew         13:44-46
Glory to you, O Lord.
He sells everything he owns and buys the field.

Jesus said to the crowds:
‘The kingdom of heaven is like treasure hidden in a field which someone has found; 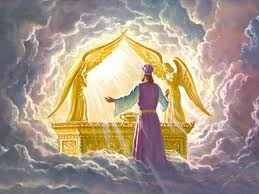 he hides it again, goes off happy, sells everything he owns and buys the field.

‘Again, the kingdom of heaven is like a merchant looking for fine pearls;
when he finds one of great value he goes and sells everything he owns and buys it.

The Gospel of the Lord.
Praise to you, Lord Jesus Christ.

We sometimes use the word ‘radiant’ with reference to people. We might refer to a bride on her wedding day as ‘radiant’. It is a word that suggests some kind of a glow, not primarily in a physical sense but in a deeper sense. It is said of Moses in today’s first reading that after he came down the mountain, having communed with God, ‘the skin of his face was radiant’. Indeed, the reading says that his skin ‘shone so much’ that the people of Israel ‘would not venture near him’. We are put in mind of that moment when Jesus’ face ‘shone like the sun’, having gone up the mountain to be in communion with God, which we refer to as the transfiguration. When we open ourselves to God’s presence in life and in prayer, we too can become radiant in a similar way. Our inner spirit comes more alive and the light of God’s presence shines through us more clearly. Moses and Jesus sought after God on the mountain of prayer. We too need to be seekers in that sense. We seek the Lord whose face, according to Saint Paul, reflects fully the light of the glory of God.

The parables that Jesus speaks in our gospel reading portray that seeking spirit. The day labourer seeks the treasure he unexpectedly found buried in a field and joyfully sells all he owns to buy it. The merchant had long been seeking the pearl of great value that he came upon and he gladly sells everything he owns to buy it. The Lord who spoke those parables is, himself, the treasure hidden in the field, the pearl of great price. He is worth seeking with all our heart, soul and mind. We seek him in our day to day lives, and, in a more focused way, we seek him in prayer. When we seek him in prayer, we open ourselves to the radiant light of his presence, and he empowers us to reflect to others something of his radiance, as Moses does in our first reading.

The scripture readings are taken from The Jerusalem Bible, published by Darton, Longman and Todd Ltd and used with the permission of the publishers.  http://dltbooks.com/
The Gospel reflection is available with our thanks from Reflections on the Weekday Readings 2020-2021:  You have the Words of Eternal life by Martin Hogan and published by Messenger Publications  c/f www.messenger.ie/bookshop